The Origin of the Temple of Prambanan

March 11, 2009
I joined the Toastmaster Club at my work, and here is my speech number 2. The purpose of the speech is to have a good speech organization, with an opening, a body, and a conclusion.

Since it took me a long time to organize this speech, I might as well post it on my blog. Note that this is a trimmed down version of the legend, with some parts edited out to avoid cultural confusion (and to fit the speech into a 5-7 minute window). 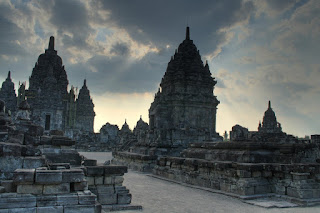 The Origin of the Temple of Prambanan
(also known as "The Legend of Bandung Bondowoso")
When you look on any of the wonderful architecture, have you ever wondered who built them, for what purpose they were built, and the stories behind the construction? Indonesia has a lot of lakes, temples, mountains, and beaches, and each of them has its own story. Each of these stories teaches its audiences a lesson in life.

Today, I am going to tell you the story about controlling your temper, and of a temple called Prambanan.

Once upon a time, there was a kingdom called Prambanan. The people of Prambanan lived happily and harmoniously. But this harmony did not last for very long. A neighbouring kingdom called Pengging attacked them. The Pengging ruler, Bandung Bondowoso, was very skillful in the art of war. He killed the king of Prambanan, and under his command, Pengging took over Prambanan.

Bandung Bondowoso was a cruel ruler. Anyone who dare to speak against him was executed immediately. The people were afraid of him and would not dare to refuse his requests.

One day, Bandung Bondowoso saw a very beautiful girl. He fell in love with the girl, only to find out that she was the princess of Prambanan. She was the daughter of the man he killed. But he wanted her. So he approached her and asked her to marry him.

The princess was surprised and annoyed. "This man has no manner," she thought. "He killed my father, and now out of the blue, he wanted to marry me?" She disliked him, but was afraid to refuse his proposal. So she thought out a plan to discourage Bandung's affection.

"I would be happy to marry you under one condition," the princess said. "You must build me 1,000 temples within a night. I love temples, and 1,000 temples would prove to the world and to me that you really do love me."

Bandung Bondowoso agreed to the condition, and he immediately gathered all the supplies and the equipments to build 1,000 temples. Now, Bandung knew mere human could not build 1,000 temples in a night. But he had a mystical power. He ruled over an army of djihnns.

When the dusk came, he summoned the djihnns and commanded them to build the 1,000 temples. The djihnns went to work immediately, and with unbelievable speed, more and more temples were built in just a few hours.

The princess was crestfallen when she saw this. She did not wish to marry Bandung. So she gathered all her servants and the ladies of the village. "Help me," she said. "Please beat the bamboo drums as loudly as you can, as you usually do." The ladies did as the princess wished.

The roosters heard the bamboo drums, and crowed loudly, since the ladies always beat the drums in the morning. Hearing the roosters' crow, the djihnns thought that dawn was coming. They were afraid of the sunlight, and fled to avoid the morning light.

Bandung counted the temples and found 999 temples ready. He was 1 temple away from being able to marry the princess. He was angry that the djihnns ran away before finishing their work. But when he saw the princess, still beating the bamboo drums, he was enraged at her trickery.

"You asked for 1,000 temples," Bandung said. "Here I have 999 temples, and may you be the thousandth one," he cursed and pointed at the princess. To his amazement and regret, the princess turned into stone. His moment of anger caused irreparable damage.

Today, if you visit the temple of Prambanan in Indonesia, please make sure to look for a lone statue of the princess -- cold, but still beautiful. And when you find it, remember that angers could cost you far more than you are willing to pay, and learn to control your emotion.

October 18, 2010
Does people realize that: 1. misspelling a word makes them look uneducated, and 2. using shorthand in emails makes them look 5 ?? Emails are NOT telegrams! You cannot save money by typing less characters in your emails, people! (I can understand if it's in SMS). Ugh! (Just have to vent...) >_<
Post a Comment
Read more

October 07, 2008
A while back, the government of Canada suddenly realized that Canadians did not save their money as much as they hoped. So, to goad Canadians into saving, they introduced the Tax-Free Saving Account (TFSA) that basically allows up to $5,000 per year contribution to grow tax-free. How the TFSA Works Starting in 2009, Canadians aged 18 and older can save up to $5,000 every year in a TFSA. Contributions to a TFSA will not be deductible for income tax purposes but investment income, including capital gains , earned in a TFSA will not be taxed , even when withdrawn. Unused TFSA contribution room can be carried forward to future years. You can withdraw funds from the TFSA at any time for any purpose. The amount withdrawn can be put back in the TFSA at a later date without reducing your contribution room. Neither income earned in a TFSA nor withdrawals
Post a Comment
Read more