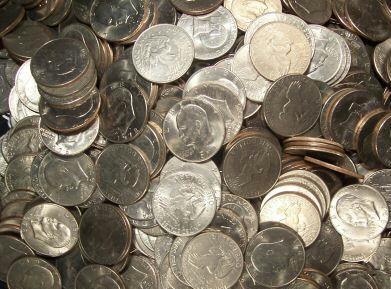 In the effort to minimize spending, I like breaking bills into coins and store the coins up in "savings" jars. It helps me stop spending, since I feel like I've been using up all my cash (when in fact I haven't).

So after collecting coins for a year, I have jars full of pennies, quarters, toonies, loonies, and probably some buttons and foreign countries' coins. It is time to trade them into cash. So off to the bank we went.

Imagine our surprise when the teller told us that we need to roll them all up nicely (manually) before trading them in. They don't have coin-counting machines in any of the branches (even in the head office). This was ridiculous. Even back in a third world country such as mine, all banks have the coin-counting machine. This is Canada! Besides, if we had them all rolled up nicely, we wouldn't need to trade them in.

So, off to Google we researched. And yup, everyone apparently had the same problem. And the only place that would trade your coins into bills are casino. Yes, that's right. Casino! We called around and found that a nearby casino stopped offering that service recently. Another call to River Rock Casino confirmed that they still provided this coins-to-bills service.

We haven't gone there yet, but does anyone know who else provides this kind of service? Banks, where every money-related transactions should occur, do not have it. And we live quite far away from River Rock Casino.

October 18, 2010
Does people realize that: 1. misspelling a word makes them look uneducated, and 2. using shorthand in emails makes them look 5 ?? Emails are NOT telegrams! You cannot save money by typing less characters in your emails, people! (I can understand if it's in SMS). Ugh! (Just have to vent...) >_<
Post a Comment
Read more

October 07, 2008
A while back, the government of Canada suddenly realized that Canadians did not save their money as much as they hoped. So, to goad Canadians into saving, they introduced the Tax-Free Saving Account (TFSA) that basically allows up to $5,000 per year contribution to grow tax-free. How the TFSA Works Starting in 2009, Canadians aged 18 and older can save up to $5,000 every year in a TFSA. Contributions to a TFSA will not be deductible for income tax purposes but investment income, including capital gains , earned in a TFSA will not be taxed , even when withdrawn. Unused TFSA contribution room can be carried forward to future years. You can withdraw funds from the TFSA at any time for any purpose. The amount withdrawn can be put back in the TFSA at a later date without reducing your contribution room. Neither income earned in a TFSA nor withdrawals
Post a Comment
Read more